GREEN CARD FOR CAR: WHY DO WE NEED WHERE TO GET ACCOUNT 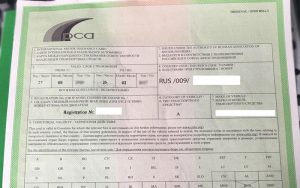 Traveling to another country is more convenient when using your own car. But in a foreign country, various dangers may lie on the roads. Therefore, before traveling, it is necessary to issue a “green card” on the car – a special insurance policy. WHAT IS A GREEN MAP? The specified policy is an analogue of CTP for traveling abroad by car. When we cross the border with a car, the usual CTP policy ceases to operate. And if the car gets into an accident in another country, then the damage will have to be paid at its own expense. And in some European countries it can be a very large sum. For such cases, a “green card” is provided. In order not to worry about damages, it must first be issued. By the way, the green card is called so because of the color of the form. It eliminates the problems not only of you, but also of another participant in the accident: if he is recognized as the injured party, the insurance company will fully reimburse him for the losses associated with the repair of the car and pay for the treatment (if necessary). There is a “Green Card” in the territory of a large number of countries. These are 48 states that are members of the insurance community. The policy has a standard form. It is produced exclusively in printed form, because different countries have their own laws that have significant differences. It can be issued for a car that is registered with state and transit numbers, as well as for trailers, mopeds, etc. There are several types of Green Card policies. There are two of them on the territory of the Russian Federation. One covers all countries where such insurance is required, the second only neighbors, which include Moldova, Ukraine, Belarus, Azerbaijan. The difference between them lies in the boundaries of action and cost of registration. WHERE AND HOW TO MAKE A GREEN CARD You can apply for a policy at insurance companies. Their list is presented on the official portal of the Russian Union of Motor Insurers. You can apply for a policy both at the office of the selected company and on its website. The first method involves collecting copies of documents and handing them along with the application to the agent. When making online you must fill out a form on the resource and upload scans of documents. A “Green Card” is issued to individuals and legal entities. It is necessary to issue it no more than 30 days before the intended trip. From the documents you need to provide: a passport and a technical passport for cars (for an individual); certificates confirming the registration of the company and the vehicle, seal (for a legal entity). You can also issue a green card when approaching border crossings, when along the road you will see shops with the words “Green card to car” or “Green Card” in English. The timing of its registration of 15 days, which does not hit hard on the budget. Tariffs for the “Green Card” are the same in all insurance companies. Installs their PCA, after consultation with the Ministry of Finance of the Russian Federation. The cost of insurance is influenced by the euro. Monthly recalculation of prices. The validity of the tariff borders from 15 to 14 numbers. In addition to coverage, the cost of the type of vehicle and the validity period. The minimum period for which the “Green Card” is drawn up is 15 days, the largest one is a year. Extend the policy can not be. Therefore, as accurately as possible calculate the duration of the trip. The lowest rates are set for trailers, the highest – for buses.