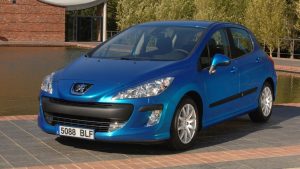 Welter has repeatedly said that the main thing in the design of Peugeot – the cat’s appearance, and the last “kitty” he turned out very elegant. Initially, the model went into a series in two bodies (three- and five-door hatchback), but less than a year after the start of sales, the Peugeot 308 SW wagon and the two-door coupe-convertible 308 CC were launched into mass production.
From plastic and sticks: we buy Peugeot 308 I for 400 thousand
What and where are we looking for? Despite all the modern persecution of cars on “heavy fuel”, if you really want this Peugeot, then you should look for a car with a diesel engine. First, both diesel engines …
No less important was the fact that the model was originally offered with a very wide engine range: atmospheric gasoline engines of 1.4 (95 hp) and 1.6 (120 hp) liters, three turbocharged 1.6 – liter engines with 140, 150 and 175 hp and two diesel engines: 1.6 HDi with a capacity of 90 or 109 hp and 2.0 HDi in versions 140, 150 and 163 hp It is worth noting that gasoline engines have German roots. In the releases it was usually written that “the engines were developed jointly with BMW,” but in fact technical documentation was received in exchange for production capacity, and both PSA and Bavarian “pennies” and Mini models were assembled with engines from French factories.
The range of transmissions turned out to be no less wide: a five-speed manual box developed by PSA, a six-speed manual transmission from BorgWarner, a four-speed automatic AL4, developed by PSA in cooperation with Renault back in 2001, a six-speed automatic transmission, commissioned by PSA by Aisin, and a six-speed robotic box EGS, developed by PSA in collaboration with BorgWarner.
Official sales of the Peugeot 308 in Russia started in March 2008. Buyers were offered cars in three versions: a 5-door hatchback, a 5-seater station wagon and a 7-seater station wagon, and from 2010 a 4-seater coupe-cabriolet was added to them. The three-door hatchback was not officially presented in our market.
The official importer, Peugeot-Citroen Rus, during the sales period, the model constantly shuffled the motors and boxes available to order. Only the 120-strong 1.6-liter EP6 engine combined with a five-speed manual gearbox or a four-speed automatic remained unchanged, while diesel engines, turbo engines and all three six-speed boxes appeared in the list of possible orders, then disappeared.
Despite the crisis of 2008, sales went quite well, the model began to gain popularity, and in 2010 the assembly of cars from French car sets was launched in Kaluga. Naturally, it was the most popular versions that were assembled, with the EP6 combined with a five-speed automatic or a four-speed automatic, and ultimately these versions accounted for more than 90% of cars sold in Russia.
In 2011, the model underwent a slight restyling (which, by the way, was not liked by everyone), and in 2013 the second generation of the model with the factory code T9 appeared. It got to our Palestinians in 2014, just under the crisis, with all the ensuing consequences: a city hatchback, the price of which, due to the fall of the ruble instantly rose to 1.2-1.7 million rubles, immediately fell out of the cage somehow mass models. In 2015, only 308 Peugeot 308s were sold (that’s the irony of fate!), In 2016, 41 already, in 2017 only 31 cars. As a result, in June of this year, the company announced the termination of sales of the model in Russia. However, two or three years ago, the Peugeot 308 (mostly the first generation, so that all the further discussion will go only about them) constantly met in the city traffic, and now many owners are not eager to part with their “lion cubs”. Scold, but not in a hurry to sell! So why love and hate the Peugeot 308?
Remember this joke about elk and hedgehog? So, the fact that the 308th is a purely city car, and there is nothing for him to do on the dirt roads, is mentioned almost in every second review on the Internet. In the words of one of the owners, “the bottom will wipe with every bump and every pebble.” And this also applies to cars with the “Russian package”, the ground clearance of which has been increased from 110 to 150 mm. After all, by an empty car, they do not drive to relatives or to the cottage, and under load, the clearance can easily decrease by 20-30 mm.
Add to this a large front overhang, which by no means contributes to driving through mounds and pits of substantial size, and a stiff suspension that can shake the whole soul on a bad road.