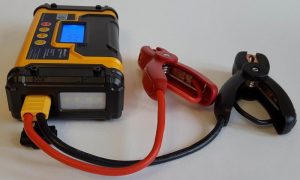 Motorists at least once in their lives have to face a situation where when they try to start the engine, it turns out that the car battery is completely discharged. In order not to be in a similar position, special devices are used to help start the engine. These are starting and starting-charging devices for cars. WHAT IT IS. TYPES OF START-UP DEVICES The following devices are used to “revitalize” car batteries: ROM – starting-charging devices. They not only help to start the engine, but also charge the battery, ensuring its further normal functioning. Such devices operate from a standard electrical network with a voltage of 220 V, so they are most often used in garages to recharge the battery and turn on the engine. Autonomous starting devices. That is why they are called autonomous, because they do not require a power connection, but they only help to start the car without charging the car battery. Devices have a built-in battery, so for their performance at any desired time, motorists need to ensure that they are not discharged. In order to correctly select the device suitable for the vehicle, you can use the following characteristics and requirements: The capacity and starting current of the device must correspond to the same indicators as the battery of the machine. Simplicity, convenience and clarity of the device. A proven manufacturer will help get a durable device that will not fail at the first use. A suitable type of device (autonomous starting or starting-charging). In the total mass of sales of devices, the lion’s share is taken up by the starting and charging devices as more functional, but autonomous systems allow using them in the most critical situations, for example, when the battery is discharged in the absence of electricity – on a long trip, in the middle of the road, on vacation, fishing and so Further. HOW TO START AN AUTO WITH THE HELP OF THIS DEVICE The main problems with starting the engine begin in winter. In the cold, a large number of additional devices powered by electricity are connected to the battery. These include heated rearview mirrors, seats, and so on. In addition, the battery itself in a frost discharges much faster. In such situations, a stand-alone device, or a booster, as it is often called car enthusiasts, can become a “lifesaver”. In order to start the engine, you can connect the booster directly or to an existing battery. This is done with the help of special devices – “crocodiles”. In order to successfully start the engine, you need to follow these recommendations: The autonomous starting device must be in a prepared, that is, charged state. When connected, the polarity must be correctly observed. It is necessary to influence the engine with the starter of the booster for no more than 10 seconds. The interval between attempts to start the motor should be approximately 5 seconds. At observance of such recommendations the serviceable mechanism starts without any difficulties. BRIEF OVERVIEW OF POPULAR BOOSTERS Most standalone triggers have additional benefits in the form of additional options. They can combine a built-in compressor used for tire inflation, a flashlight, a USB port for recharging a mobile phone or connecting other electronic devices, 12 V output, and so on. In addition, some systems have very compact dimensions, which is practical and convenient for constant driving in small cars. There are many popular models of APU, among which we note the PowerPlus POW5633 and consider the following of its features and qualities: A well-known manufacturer from the Netherlands. This ensures the high quality of the device itself and a long service life. European manufacturers are working in conditions of tough competition and constant quality control, so the reject rate is the lowest. The small size, the minimum with respect not only to the usual starting-charging device, but also compared with the average APU. It is easy to carry such a device with you, it is lightweight and takes up very little space. But its presence in the trunk guarantees the start of the engine even in conditions of completely deserted terrain. The warranty is 2 years (for free maintenance). This is a very long time. The device is equipped with a built-in automotive compressor. There is a “light up” – 12 V output for connecting various technical and household appliances. There is a practical USB port for using modern electronics. The device has an ammeter. The kit includes a LED flashlight. Of the minuses of a particular device can only be called shortish wires for connection. According to the main characteristics it is one of the best options for an autonomous starting device for a car. With the broadest selection of the proposed devices to find the right one for specific purposes will not be particularly difficult.