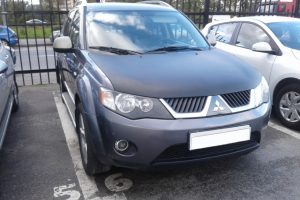 It is now Outlander in the model range Mitsubishi occupies an intermediate position: between the almost accessible ASX and the flagship Pajero. And in the distant 2006, when the second generation entered the market, there was no compact crossover in the model range – compared to the previous body, the dimensions grew quite large (in some catalogs this model had the prefix XL). Many observers saw this as a marketing miscalculation, because the same year Nissan Qashqai entered the market, who not only became a bestseller, but, in fact, founded the class of compact crossovers.
Partly, Mitsubishi recognized this by releasing competitor Qashqai in 2010 in a failed attempt to pull the blanket over. But back to our search. Despite the solid size and impressive volume of engines in 2.4 and 3 liters, some tend to underestimate this car. Although it can sometimes be bullied in the city and on the highway, and if necessary – turn off the road into the mud. It is a pity that some individuals with a distorted view of reality tried to squeeze out of the Outlander a little more than he could. As a result of their subversion in the market a lot of cars, beaten in the race, and even more – ditched off-road. But the sum of 700 thousand rubles still allows us to hope for success.
By and large, the second generation Outlander did not have uniquely bad engines, and in general the car was reliable. Motors 4B11 with a volume of 2 liters and 4B12 to 2.4 liters are practically twins and differ only in different diameters and strokes of the pistons. True, these engines were spoiled by the reputation of the G4KD and G4KE engines, which are their copy, but produced by Hyundai-Kia. The Koreans slightly changed the design of the Japanese engines, after which they began to periodically suffer cylinder-like bully. On the “Mitsubishevsky” 4B11 and 4B12, such an outrage is much less common, and they should not be afraid. True, they, like the Korean “relatives,” love to knock valves with age – there are no lifters, and owners rarely play around adjusting gaps. So when you buy it is necessary to listen to their work “on the cold”, when the sound of the valves is heard best.
Belt on the cone: buy Nissan X-Trail II with a mileage of 800 thousand
What and where are we looking for? This time, to confirm or refute the well-known regional stereotype that Moscow and St. Petersburg cars cannot be bought because their bodies dissolve under the onslaught of tons of reagents and …
Three-liter 6B31 Outlander – this is another successful engine Mitsubishi, and its resource is not less than the previous ones. But Outlander rides with him is not much more fun, and gasoline eats with enviable appetite.
The main advantage of cars with V6 is the presence of a fully-fledged JF613E automatic machine of a very decent company Jatco. If you do not set out to kill this box, it can please not less than 200 thousand kilometers before the first repair.
And now – two news. One good, the other, as expected, bad. Let’s start with the bad (for fans of stereotypes): with junior engines only the variator is available as an automatic transmission. Well, the good news is this: the CVT is also very good. JF011E – the leader in popularity among CVT, and its repair has long been well mastered. And if you do not try to squeeze out all the juices in the mud in the car, do not jump on curbs and do not crawl every winter along the snowy virgin soil, the variator easily passes 150-200 thousand kilometers to repair. But he also has one peculiarity: he is not so critical of the low oil level as his purity. If the previous owner did not recognize the need for its timely replacement, the variator can give the soul to God much earlier.
Since the machines with engines of 2.0 and 2.4 liters are much more than with the V6, then the variators are more common than the classic automatic gearbox. And if the mileage of the car has passed for 150 thousand, and she herself is marked by the scars of off-road operation, then the variator can live out its last days. However, the AKP is also, so from the car on the “toothed” tires, with the “chandeliers” on the roof and a ton of land in the hidden cavities, we traditionally run as if from a devil.
And immediately in the bull’s eye …
Either this day the planets somehow correctly got up, or we have this time an ugly lot of money, but the very first car we examined may well become a good acquisition. True, for it will have to pay almost all our money – 690 thousand. But for them we get a car with one owner, service book and documents confirming the quality service. Mileage for the car in 2008 is very small – 118 thousand kilometers. Motor – 2.4 liters, transmission – variator.
For the sake of interest, see the documents. Indeed, there are all work orders, and even for changing the oil in the variator by 50 and 100 thousand. Even more happy completely native paint.