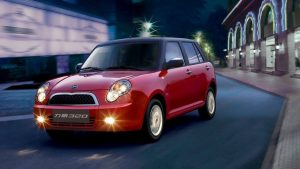 They say that if you see something that looks like a duck, walks like a duck, and quacks like a duck, then this is a duck. But if something like the Mini flashes in the traffic, this does not mean that you actually saw the car of the famous British brand. It is possible that you caught a “Chinese” mimicking him by the name of Lifan Smily.
The Smily compact hatchback, belonging to the A segment, was first shown at the 2008 Beijing Motor Show. However, then he was called (and is still called) Lifan 320, and the name Smily was assigned to the model exclusively for the Russian market.
When someone says that Smily is a clone or a copy of Mini, this is at least not true. The car is really made with a big eye on the iconic minicar, but it is rather a “variation on the theme” than direct copying. The development team included over 1,000 Lifan engineers and even more invited experts from the USA, UK, Germany, Italy and Japan. Work on the project required an investment of about 100 million yuan and took about three years.
The Smily engine is a 1.3-liter 8A-FE with an output of 89 hp, produced by Lifan under license from Toyota, the box is either a five-speed mechanic, or the variable speed drive that appeared in 2011. In the same 2011, the model was assembled at the Derways factory in Cherkessk.
At the start of sales, Smily was almost the cheapest car on the Russian market: the price for the basic package was 260,000 rubles, and the buyer received very good equipment for them. In 2015, the car underwent a slight restyling, many customer complaints were corrected, but in times of crisis, this could not change anything. In 2016, it was decided to discontinue both the production of the model in Cherkessk and its sales in Russia. Nevertheless, in his homeland Lifan 320 is quite alive and well, including in the form of an electric car, which can be rented in carsharing mode.
The Russian motorists Smily left a very mixed impression. Some reviews ooze poison and bile against a “bucket with bolts” and “a worthless piece of barely moving thundering metal”, in other people almost admit love, are called exclusively diminutive nicknames like “smiley”, “lifchanchik” and “ ulybaka “, and the general sense comes down to” great car, I recommend. ” So where is the truth? And the truth, as always, is somewhere nearby, so it’s worth looking at what they love and why they hate this little car …
The first impression about the car is its exterior design. But here, as you know, the taste and color … Some people like the frank exploitation of the Mini theme, and this similarity confuses someone, because friends perceive the car as either a caricature or as a “fake Rolex”, and you can convince them as much as you like. that this is not a copy at all, but an independent work “based on”.
But the views of the owners of the cabin demonstrate a much sharper polarization. Yes, bright salons are very popular in China. Only it is worth considering that a limousine salon or a prestigious SUV, in which soft cream leather is combined with natural wood, is one thing, and the interior of a budget car, during the development of which designers have saved every yuan, is quite another. In general, there is nothing surprising in the fact that the bright Smily salons, which, when they first met, conquered the hearts of Russian customers (yes, it was customers, not for nothing that one of Smily’s nicknames became a “bra”), in the course of exploitation, they sloppy and dirty. The fabric, which seats are covered with, gets dirty and salted, the plastic is scratched and abraded … And not only is it worn down – under the effect of a rag the plastic peels off the texture!
Therefore, the appearance in 2013 of cars with black interior panels and practical gray upholstery was greeted with approval and complete understanding.
The main reason why the overwhelming majority of owners acquired Smily was not the delights of Chinese designers (although it must be admitted that the interior architecture is quite original and not at all like the Mini interior). The owners frankly write that they were looking for a small-sized machine, a new one or almost a new one, but one so that when buying it you could do without a loan. For example, in 2015, after the course jump, only Lada Granta, Datsun and Smily fell into the category of “up to 400 thousand rubles”.
And for this money, only Lifan offered already in the basic configuration an air conditioner, ABS regularly crunching on a slippery road, central locking with remote control, power windows on all four doors.