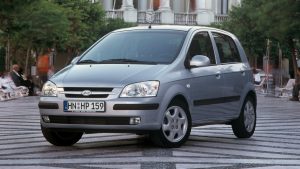 At the turn of two centuries, when humanity with such a pomp and one year ahead (because in fact the XXI century began in 2001, and not in 2000) celebrated the new millennium, marketers noticed a significant increase in demand for subcompact car models. The ambitious Korean concern Hyundai could not stand aside. As a result, in the fall of 2001, a concept called Hyundai TB was shown at the Tokyo Motor Show, and six months later, in March 2002, the Hyundai Getz serial babe flaunted on the Geneva podium.
Then many experts and journalists drew attention to the absolutely European appearance and design of the interior of the novelty. As a matter of fact, there was nothing surprising in this: the European engineering center of the Korean concern located in Frankfurt was engaged in the development of the design. The main highlight was the layout with a fairly vertical fit, a high roof and a nearly vertical rear door, which allowed to increase the internal volume with very modest external dimensions. END_OF_DOCUMENT_TOKEN_TO_BE_REPLACED